A world without water: 5 things I learned when Cape Town lived on the edge

Written by Nathalie Leblond
Environment and Green Hygiene
Share On

It’s the start of May in Cape Town and I’m writing this whilst looking out of a rain-spattered window. Born in June, as a child I used to resent the fact that every year - without fail - I had a rainy birthday; no swimming parties for me, I considered myself lucky if the garden didn’t flood and my friends could squelch up the path to our front door. But after Cape Town’s brush with ‘Day Zero’ last year, I feel differently about the (nearly) inevitable rain on my birthday.

According to Wikipedia, “the Cape Town water crisis was a period of severe water shortage in the Western Cape region, most notably affecting the City of Cape Town. Whilst dam levels had been declining since 2015, the crisis peaked during mid-2017 to mid-2018 where water levels hovered between 15-30% of total dam capacity. In late-2017, there were first mentions of plans for “Day Zero”.

The concept of “Day Zero” was introduced by the City of Cape Town in order to focus residents’ and visitors’ attention on saving as much water as possible. It represented the day the City predicted that taps would - quite literally - run dry -  unless drastic cuts to water usage were made.

Water restrictions - at their most severe - were at an unprecedented Level 6b and Capetonians were urged to restrict their daily usage to a mere 50 litres per person per day. But the consequences of reaching Day Zero were predicted to be far worse: we were told that we would have to stand in line to collect a meagre 25 litres of water per person per day at designated collection sites.

However, better rainfall last year over Cape Town’s traditionally wet season (May-August) combined with reduced consumption has meant that the City not only avoided Day Zero but has also been able to reduce water restrictions from level 6b to level 3. Whilst we’re not completely out of the woods, it feels to me as if Capetonians have breathed a collective sigh of relief that the possibility of a Day Zero is over.

But what did we learn from this experience? Has our brush with Day Zero taught us anything as a city or as residents? I found an excellent article on a site called The Conversation, entitled “What Cape Town’s drought can teach other cities about climate adaptation” in which they discuss the lessons that other cities can learn from places like Cape Town, as a way to guard against future shocks and stresses. Three years of low rainfall led to very low dam levels, but there were also breakdowns in the interaction between national, provincial and municipal governments that exacerbated the problem.

But that’s the stuff of policymakers. What about closer to home? I thought I would share with you 5 things that I learnt from Cape Town’s brush with Day Zero.

1. Thousands of people live on less than 50 litres a day AND have to walk to collect it:

When the 50 litre limit per person per day was first introduced, those of us in the more leafy suburbs thought it would be impossible to stick to. How would we do laundry? Clean ourselves?  Suddenly a lengthy shower every day (and twice on gym days) was no longer an option, and lugging buckets around became the new normal. And let me tell you, water is HEAVY! I can barely carry one 25litre container.

Suddenly we were faced with the prospect of fetching our water, just like people in townships have to do every day. The real lesson for me was that for many township dwellers, every day is day zero, and a hot shower - even a 2 minute one - is a luxury few can afford.  Although infrastructure is a priority for local government, this really brought it home to me and made me realise just how far up the priority list it should be.

2. Baking is not very water-wise:

Need I say more? My 9-year-old daughter loves to bake with me, but beaters, spatulas, measuring cups, bowls and baking trays all need to be washed-up afterwards, and when you are trying to keep your washing up to a minimum, baking feels like an indulgence.

3. Showering less often can be good for you:

We went down to showering every 2nd - 3rd day (or after a workout), with liberal applications of deodorant and wiping down of the important bits in between. My husband even decided to stop washing his hair. He has always struggled with dandruff and an itchy scalp, and as a result, has been washing his hair every day with an anti-dandruff shampoo since we met.

He decided to go “cold turkey” on shampoo after helping me research an article on the use of bacteria in beauty products and the way that soap is damaging our microbiome. I imposed one caveat - if I could smell ‘dirty hair” I would throw him straight into the shower with a bottle of Head & Shoulders.

Suffice to say its been 18 months since he last used shampoo, and his itchy flaky scalp is a thing of the past. Now he just rinses his hair with hot water whenever he showers. We use less water… and much less shampoo.

4. Certain water saving habits have stuck … and some haven’t:

Now that the pressure to save as much water as possible has eased slightly, I’ve noticed that some of the more drastic water saving measures (like turning off the taps in public bathrooms) have been reversed. But I’ve also noticed that most public bathrooms sill have hand sanitiser available, and they’ve kept the posters and reminders to use water sparingly.

I discovered that I really dislike using hand sanitizer over long periods of time. Whilst it’s very good at sanitising, what it can’t do is clean hands in the same way as soap can. I had a ballpoint pen explode all over me at work and I went into our bathroom and rubbed ineffectually at the mess on my hands with sanitiser and paper towel - but to no avail. Soap and water would have done the trick, but the taps had been turned off and the soap replaced with sanitiser!

At home, we are still extremely mindful of running taps, we still “let it mellow if it’s yellow”,  and showers are still much shorter than they used to be. But we’ve eased up on the buckets in the shower now, and the washing machine water (which really was pretty disgusting) is left to go down the drain once again. (Check out our infographic on how to use greywater safely if you are still recycling washing water.)

5. We need to change the way we garden:

So many conversations were had about the sad state of our lawns or the fact that our roses were dying … But Cape Town has a Mediterranean climate, and instead of bewailing the effect of the drought on our beautiful English gardens, Cape Town gardeners should be looking to places like Greece, Spain and Portugal for garden inspiration.

You very seldom see acres of rolling lawn, oak trees and roses in the Med, and for good reason. Cape Town’s southern suburbs are planted like Little Britain, and whilst it’s beautiful, and part of our history and heritage, it’s also not sustainable. We have to face up to the fact that South Africa is a water-scarce environment, and start gardening accordingly.

If you want more information on water-saving solutions for your business, visit our website: www.initial.co.za or read this blog post: How to think waterwise and flush less.

I joined Rentokil Initial South Africa in 2004 as the PA to the MD, and after 6 months maternity leave I re-joined the Company in 2009 as the Marketing Co-ordinator for Rentokil. I'm now the Marketing Communication Manager for Rentokil Initial. I'm still terrified of cockroaches (Americana's only!) but the rest of the creepy crawlies we deal with don't really bug me (see what I did there?), so I guess I'm in the right industry! I am passionate about what we do here at Rentokil Initial and also write for our Hygiene Blog, which can be found at www.initial.co.za. Life outside of Rentokil mostly revolves around my daughter, who has just turned nine and my husband (who is a bit older). I love living in Cape Town and wouldn't trade living here for anywhere else in the world. 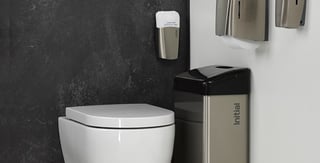